A PWB backgrounder … success is brewing 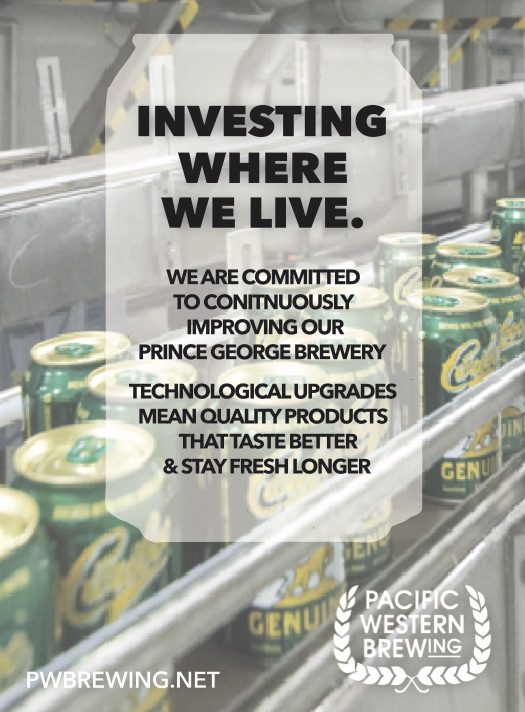 And, 2019 is shaping up to be another year of strong sales, product line diversification and philanthropic investments back in the community unparalleled in our industry.

One of the most frequent questions we are asked is how we enjoy ongoing success in a marketplace dominated by internationally-owned mega-breweries with unlimited marketing resources. What’s the secret? There isn’t one … just constant dedication to brewing a quality product and selling it at a fair price. We also have a fiercely loyal consumer family base for which we are most proud and grateful.

At PWB, we are good at what we do, and we do it in the backyard of one of the finest Interior communities in this province. Prince George embodies BC’s entrepreneurial spirit. Like other BC communities, big and small, it has forged its identity and purpose from raw material and human grit. It has been PWB’s home for more than 60 years.
Brewery upgrades enhance quality

Recent technological upgrades at our Prince George brewery have enhanced our ability to deliver products that taste better and stay fresh longer. Cindy Hartford, PWB’s Quality Assurance Team Leader, monitors the new Krones volumetric can filler ensuring precise fill volumes for each and every can.

PWB General Manager Scott Rattee says: “The brewery has invested $4 million in technological upgrades. At PWB, quality has always been Job #1, and these upgrades reflect our commitment to continuous improvement.

“Our dedication to the production of quality product has been a long-standing corporate goal that was first highlighted in 1996 when we became the inaugural brewery in North America to adopt the certified ISO 9002 quality assurance standard.

“Our beer tastes as fresh in the can as the beer in the tanks. And, our new packaging technology accomplishes that without the use of preservatives; just pure beer made with our brewery’s pure spring water.”

In 2018, Pacific Western Brewing was proud to release of the first batch of Pacific Free, “a gluten removed” lager for a discerning, health-conscious generation of beer lovers.

Scott Rattee says: “Pacific Free is brewed just like other great craft beers. However, once the beer is transferred to the fermentation tanks, we add a brewing enzyme that breaks apart and removes the gluten protein chains.

“Like other gluten-free beers on the market, Pacific Free may still contain minute amounts of gluten. So, to assure consumers that our process meets recognized industry standards for gluten removal, each batch of Pacific Free Lager is tested by an independent lab. The beer is released for packaging only if gluten levels measure less than 20 parts per million.”

Rattee adds: “And, we have gone a step further: The lab’s test results for each batch are being posted for all to see at pwbrewing.net/testresults.”

The benefit of this gluten removal process is that it allows PWB’s brewmaster to stay true to the original Czech brewing style, producing a crisp, clean, golden lager that has a good malt character but is accented toward the hop with its aroma and dry finish.
PWB plants more than 100,000 trees in the Interior

Thanks to Pacific Western Brewing and its customers, a team of more than 90 tree planters planted 100,000 seedlings last spring on Crown land that had been scorched by the devastating Elephant Hill forest fire in 2017.

Funded by PWB’s ongoing reforestation program, this project helped BC recover from a fire season during which a thousand fires swept through a million hectares of forest. The Elephant Hill fire was one of the worst, covering 190,000 hectares.

Ministry of Forests stewardship technologist, George Williamson, said the PWB portion of the planting was “definitely significant,” representing more than 10 per cent of a one million tree planting program over an area of 650 hectares located near Watch Lake east of 70 Mile House. 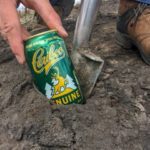 Nigel Fletcher, Forests for Tomorrow, said: “Through the Forest Stands Management Fund we are able to collect funds and put them directly back into silviculture. And, we are very thankful that Cariboo (PWB) has stepped up to the plate and given us some funds.”
Williamson added: “Investing in your own local forest is just the right thing to do.”
60-plus years of brewing history

In 1957, the local newspaper headline shouted: “Public Acclaims Prince George’s Newest Product.” The next day, the brewery held its first open house. This year is the 62nd anniversary of commercial brewing in Prince George, and the words of the first president, Donald Lauder, echo: “We are more firmly convinced than ever that the company’s choice of Prince George as its home was its soundest step.” 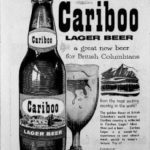 When the brewery was purchased by Kazuko Komatsu it really started to claim its place as a job-sustaining, quality-focused, community-oriented cornerstone of the Prince George business community.

Kazuko had become aware of the brewery and its potential when arranging for the export of Dragon Dry to Japan and Hong Kong through her exporting company Kowa Canada. By August of that year, the City of Prince George had endorsed Pacific Real Draft as the city’s “Official Beer.”

The rest is history. Kazuko’s tenure as the seventh and longest-standing owner of the brewery lasted for 27 years. In that time, she accomplished what an earlier controversial owner, Ben Ginter, thought he deserved, but could never achieve … she earned the trust and support of the Prince George community. Sadly, Kazuko passed away last July after a long, valiant battle with cancer. 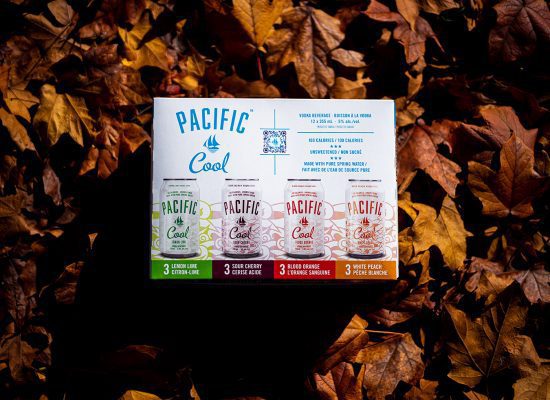